Posted on September 4, 2011 by nancymack

I felt lonely last year at the tree planting for the Spokane Indians baseball team. The Northern Red Oak was planted across from some of the concessions in front on the stadium. Because of the way minor league teams are set up there’s not a good chance of getting the players all in one place at one time. So, over a two and a half hour period only five or six players showed up to write their tree-grams, shovel and eat some cookies. It wasn’t the team building exercise that I had hoped for. 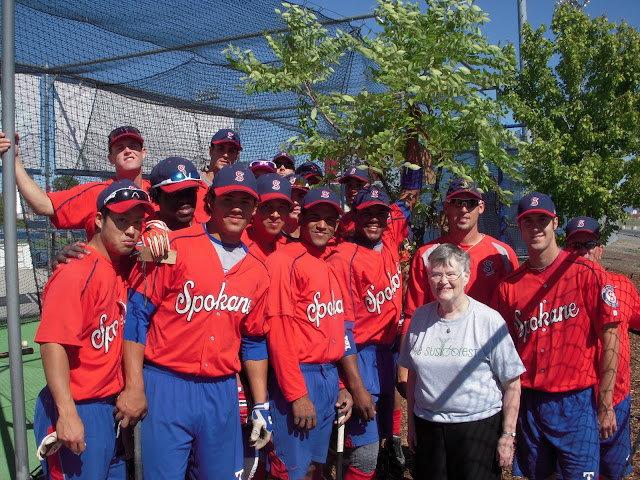 What a difference this year! Yesterday the 2011 team Kentucky Coffee Tree was planted in the Grotto, a place where spectators and players can see it. And it’s right by the batting cages and lots of young men were batting away. They all stopped and came over to listen to Susie’s story, to hang their tree-grams and eat cookies. I think they listened to my thoughts about teamwork although they lost the game last night.

The team staff thinks we should do this earlier in the season next year – not the day of the second to last game of the year. Go Spokane Indians! Win your last game!

This entry was posted in Plantings. Bookmark the permalink.