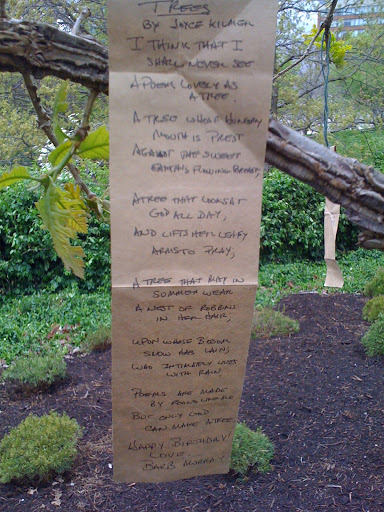 this venture of mine.

#1 Never give up the microphone. At the Cystic Fibrosis tree planting I was going to do my usual spiel and was allotted a few minutes. As the reality of 500 people ready to go on the fundraising walk began to sink in, the organizers shortened the time and then asked if I would let one of their speakers tell about Susie and the tree. I gave her some info and she announced about the planting – nobody came over and we had to pull people in after the walk. I’m the one with the knowledge and the passion and I could have drawn more people to that out-of-the-way spot. I won’t let that happen again.

#2 No more either-ors. At the opening of the new shelter in Polly Judd Park, a really good crowd listened to the short talks from the mayor, the Judd family, the architect, and the woman who made this happen, Pam Deutschman. Then the master of ceremonies offered the crowd a choice, the tree planting, the walk along the hillside, or PANCAKES. Guess which one most everyone went to. Next time no choices – until after the tree planting.

#3 Keep you mind open. So many of the things we do at a tree plantings come from the people who attend. The cookies, the laminated bookmarks, and the tree-grams became a part of the ritual by chance. In St Louis at the National Park where we couldn’t hang tree-grams someone suggested putting one in the ground and I thought that was a great way to write something very personal and have it disintegrate among the roots and travel up through the whole tree. Last Friday there was a planting for a little girl who lost her mother. I told the woman who arranged this for the family about that idea. She and her children arrived at the planting with their own tree-grams cut out in heart and flower shapes to be buried among the roots. Now I will be cutting out shapes to bring to the plantings.
I will keep listening and learning.