Time to Get Back to Work

I guess I can’t keep using a limp as an excuse for not using my brain and my fingers because now I’m home from a wonderful trip to Europe and I brought home one souvenir- a cane. On the third day I found that I couldn’t read German as I passed a sign that clearly stated, “STUFE” and fell off the step it warned me to watch out for. I know “watch your step” in German very well now. I did something to my hip and am now back to normal after a lot of lazing around.

I kept up on all the tours and found that limping is very tiring. BUT, I did get two trees planted! Here are the stories:
To plant a tree in Luebeck, Germany, the parks department asked for 500 euros and several weeks. I was prepared to do that but my host family in the village of Beidendorf didn’t think that was a good idea and offered me a little walnut tree that they had grown from a nut from their mature walnut tree. Their neighbor’s daughter wanted a walnut tree and her family would like to have a Susie Forest tree. So I hobbled across the street with Ulrich and watched him plant the little tree and in the evening it was dedicated and hung with tree-grams. A tree in Germany! Yay!! 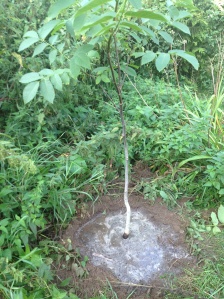 Our group left Germany for a rented chateau in northern France. I had already contacted the owners about planting a tree there and got an ok. Because we were out every day touring and the owners were busy getting ready for a big shindig right after we left, it was hard to find time to get the tree. On one of the errand runs later in the week they stopped at a nursery and picked up their choice, a sweet cherry. I got to see it in its pot and was told where they thought they would plant it. That night, the last night there, I thought it had been planted and walked out in the fading light to see it, but I couldn’t find it. I left for home in the dark the next morning without seeing if and where it was planted. Later I found out from my fellow tourists that it was planted later that morning in a different location and I will see pictures soon. Ahh, there is a French tree!
Another yay!!