I arrived at the Methow Conservancy auction Thursday evening to find that Sarah had dreamed up a different way to use the Susie Forest trees. Two years ago they were used to boost the “Raise Your Paddle” portion of the auction and a tree was donated for every $5000 donated. The story of Susie pushed the amount over the $10,000 mark and the Conservancy asked their members via the Internet to decide where the trees should be planted. They were planted last fall along the Susie Trail in Winthrop.

Sarah asked if I would agree with her “weird” plan. I told her that I liked “weird”. The plan: it would be announced at the start of the live auction that a secret donor would be giving a bonus gift to the winner of every item that sold for the set value or higher and the gift and the donor would be revealed at the end of the auction. The Conservancy was concerned that many of the items had been going for less than they were worth. Guess who the secret donor was and what the bonus gift was. Of course I agreed because I love weird, secret goings-on. And, ten of the fourteen auction items passed the test and now there will be TEN more Susie Forest trees in the Methow Valley.

Friday broke new ground on early tree plantings. Before this year the first tree has always been March 21 in Spokane. Because it’s the anniversary of Susie’s death the arborist has promised that it would happen no matter the weather. He even promised to thaw the ground if need be. One year the the ground was white and the snow was falling sideways as the tree went into the ground. This year in Puyallup where it doesn’t get so frigid we planted a tree for Steven Michael Miller on a cold, windy, rainy day. The rain stopped long enough for me, my daughter Becky and my two grandsons, Sam and
Tim to write and hang our tree-grams. Then we placed a painted stone next to the tree and by Sam’s and Tim’s trees. Then the rain started again. So now George Washington’s birthday is the earliest planting day. 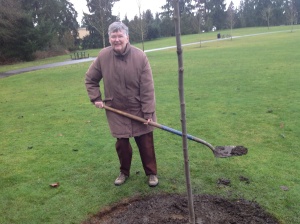 Becky and I went to lunch with Gael (one of Susie’s oldest friends)and her husband Jason before I caught the flight home. We talked about growing up times and Susie and of course the Susie Forest. They planted a tree for Susie in their yard in Lakewood and when I asked about it, we got into all the trees in the Forest and Jason, a city councilor, thought there should be more than one in their town. I hope so.

And – there might be an eleventh tree in the Methow. After Susie’s death a friend of hers got a new dog and named it for her. He was afraid that I might not like it but I told him that Susie would love it. He brought Susie to the auction so I could see her again. She’s a lovely dog and while petting her I mentioned that I thought a Susie dog should have a Susie tree. He smiled. So – maybe.

Time to get back to my resolutions. I think I’ll work on #6. I’ll report back next week. 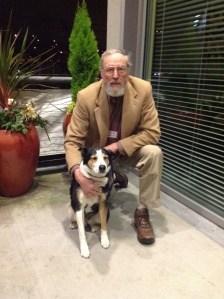